I just read something an 'article' about Obama's recent speech, "A More Perfect Union," addressing issues of race in our country. This 'article' consisted largely of name-calling saying Obama was a big fraud and was playing the race card and trying to guilt whites into voting for him.

Of course, this leads me to believe the writer couldn't possibly have actually seen or read the speech. It was one of the most eloquent, direct and blame-free discussions of race I've heard. He addresses a history of past inequities but puts it into the context of our countries ongoing process of perfecting our democracy. Alluding the to Preamble of the Constitution, ("We the people, of the United States of America, in order to form a perfect union, establish justice, ensure domestic tranquility...) he enjoins us all to be responsible, compassionate and work together in the great American experiment.

If you haven't seen/heard it you can find the video and text here: http://my.barackobama.com/hisownwords

Anyway, back to the article... The reader comments cheered the author on for his "insightful analysis" and lamented the cultish Obamaniacs. "Can't the see this guy is all pretty talk with no substance. They've all drunk some powerful cool aid."

So... I felt compelled to respond.

It makes me sad to see the (lack of useful) dialogue happening here.

Why did Obama give a speech addressing race? Because his opponents and the media were making it an issue. Yes, he did it while running for President. That does not make straight-talk about the topic any less useful.

While other candidates are mud-slinging, name-calling and trying to polarize people, Obama responds not by saying, "Poor me. They're picking on the black guy again." Rather he opens a thoughtful dialogue about the situation with race in the country.

So let's look at it.

Fraud:
An intentional perversion of truth; deceitful practice or device resorted to with intent to deprive another of property or other right.

The Clinton campaign calls Jeremiah Wright anti-American and depicts him as a dangerous fringe element. "Ooops... We forgot we invited him to the White House dinner we organized for our nation's religious leaders. Uh-oh... and there are pictures of Bill Clinton shaking his hand with Al Gore standing in the background and Hillary at a nearby table?"

The Clinton campaign circulates the NAFTA news from Canada calling Obama a liar on the days before the OH and TX elections. "Oops... the quote was actually from somebody on our campaign staff and the Obama folks never said anything inconsistent with Obama's stand on NAFTA."

And while campaigning in OH (where industry jobs have been lost overseas) Hillary speaks out against NAFTA saying she wouldn't support it as it is and has always been opposed to it. "Oops... I want to count my husband's time in the White House as part of my experience but not be held to account for what we actually did during that time." "Double Oops... My tour schedule and speaking engagements where I was promoting NAFTA and how great it will be for the country are on record?"

McCain saying he will always stand firm against the use of torture because he's experienced it and knows the depths of its inhumanity. "Oops... You mean for me to play with the big boys and get the endorsement from the White House I have to vote for torture? Okay, torture it is, then."

McCain saying he's for political reform and holding politicitians to account. "Oops... You mean I'm not supposed to use public funds of my office to pay for my fundraising trips?" "Oops... I'll take millions of public campaign funds and then when I reach the spending limit just break the rules and take the RNC money."

After being one of the 5 Senators involved in S & L bailout fraud, he says he'll never abuse the influence of his position again to interfere with regulatory bodies. "Oops... You mean I can't tell the FCC they have to process my lobbyist friend's application by X date?" Then after claiming he never sent the letter to the FCC pushing them for approval. "Double Oops... You have my sworn testimony at Senate hearing talking about the contents of the letter I just said I never sent?"

You say Obama is all pretty talk. Read his Blueprint for Change and criticize him on the merits of his plan, rather than blindly saying he doesn't have one.

Many here seem to get their jollies with the name-calling of Obama and saying that he's a fraud. But if you're shouting "fraud" while supporting one of the other corrupt politicians, you really have to wonder who's been drinking the Kool-Aid.

Feel free to comment. (But I'm hoping for something other than name-calling and ideological righteousness.)
Posted by Arthur Brock at 6:19 PM No comments:

Sometimes when the list of things to do gets to long, I experience a kind of paralysis that I think of as overwhelm.

I have a similar experience in the domain of writing. I sit down to write something and have so much stuff backlogged in my brain that it is difficult to write about the thing I’m trying to.

This is strikingly clear to me as I tackle the notion of writing a book. I hear stories from writers about how they hate writing, how they have to force themselves to do it, or sometimes how they get dragged kicking and screaming through the process by the book calling itself forth to be written.

This last case is how I feel. The more I think about and talk about the book, the more it grabs hold of me and won’t let go. So when I try to surrender myself to it, I think of all the scores of other things that I’ve promised people and that I’m supposed to be writing.

So, you can imagine how that affects the chances of me writing in my blog.

…but who knows, stranger things have happened.
Posted by Arthur Brock at 6:18 PM No comments: 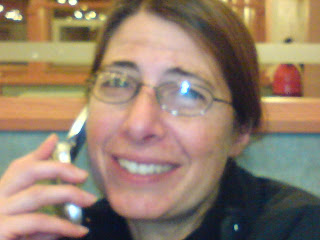 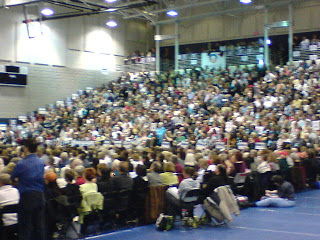 Photos from the Jefferson County convention and assembly (Colorado) 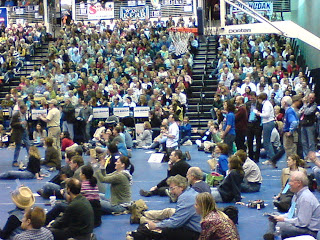 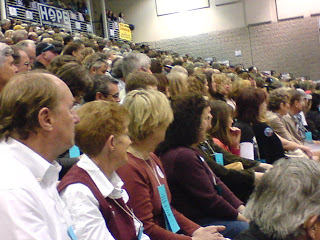 I’m blogging from the Jefferson County Democractic Party Assembly/Convention. This is a strange and interesting experience. There were a number of speakers, the county officials, Presidential surrogates, Senator Salazar, Congressman (and Senatorial Candidate) Udall.

A Denver commissioner spoke on behalf of Hillary Clinton and did a nice job of portraying her as the tough broad who knows how to make back room deal happen, and the only candidate that opposed Cheney’s back room energy deal.

Ed Perlmutter spoke on behalf of Barack Obama. Frankly his speech was quite disappointing. Other than reading some quotes from Jefferson and Washington, his main point was about how the little things that show what kind of person someone is, Obama gave his char to Ed’s wife at an event.

Yeah. I know. It seems like there are a lot of other worthwhile things to have said. I’m not sure Perlmutter was in the best position to be speaking to this group since he was addressing his own constituency and needs the votes from the Hillary supporters to keep his office.

After all the speakers, there were nominations for county commissioners

The turnout is certainly impressive. Apparently there are over 3,000 delegates and 1,200 alternates that have shown up. The alternates are still awaiting word for admittance and this main room is already standing room only.
Posted by Arthur Brock at 12:53 PM No comments: